Bring Joy Through Struggles: Danny’s Story of Love for The Foundry

Years ago, a young boy named Danny began attending the Boys’ Club in Bowling Green, Kentucky, at the age of eight. That organization became such an integral part of his life that he kept attending through the age of eleven. The building that was then known as the Boys’ Club would years later take on its new identity as The Foundry Christian Community Center. Young Danny had no way of knowing that he would someday return to this building in a much larger capacity. 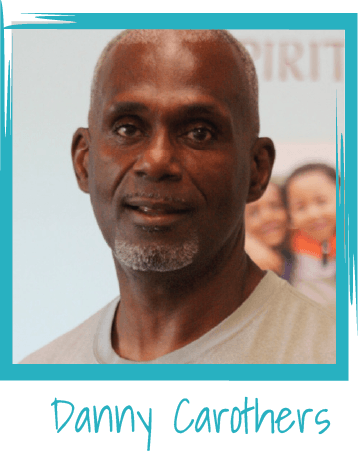 Danny Carothers is the beloved Community Director at The Foundry, and he carries out many roles. Checking on the grounds, conducting security work, supervising the community garden, overseeing the janitorial system, and driving the bus for Megan’s Mobile Grocery are all tasks you could find him doing.

How did Danny find himself in this role, doing so much for The Foundry?

Before Danny was employed by The Foundry, he had been mentoring a young man who was planning to become a teacher but needed help preparing for the required practice test. Danny connected him to some mentors at The Foundry, and the young man also took on the role as Community Director. As expected, with the help of The Foundry, he eventually passed the necessary test, became employed by the school system, and had to resign from his role as Community Director. Danny, who had already worked for twenty-seven years in a factory, longed to be in a position where he could work directly with people and believed God was leading him into this newly vacated role.

“Never in a million years would that little boy at the Boys’ Club have imagined I would be here someday!” Danny Carothers said with enthusiasm. “Every day is a gift as God allows me to work with all these beautiful people.”

Danny overflowed with joy as he told about the community garden program that had plots gardened by twenty-nine families last year. This included four different nationalities, and one family from the Congo included fifteen people.

“Lots of vegetables came from that garden last year,” Danny said proudly. “There were language barriers, but you could still feel the love between everyone.”

The children at The Foundry also make Danny enjoy coming to work every day.

“I get there about 7:15 every morning,” he said, “so I’m able to see them getting off the bus. I watch their shoulders lift as they come into the building and see them smile at they go toward the big breakfast waiting for them.”

Danny said he wanted to make a difference in the lives of these children, so he took multiple trainings and tests so he could interact with them more effectively.

“I chat with the kids and play with them in the gym,” Danny said. “If I have to stop by a classroom, I’m careful to pick the best time because the kids get off task so easily. The teachers will have them working on something, but once they see me, they all start calling, ‘Mr. Danny! Mr. Danny!’ So I try not to be disruptive.”

Danny said the blessings that come from interacting with those from The Foundry, and also Megan’s Mobile Grocery, are two-fold.

“We all have struggles,” he said. “If I can bring somebody joy among their struggles, that helps two people—me and them.”